Three year old Jessica is at the grocery store with her mom. While they are checking out, Jessica notices her favorite candy bar. “Mom can I have that?” asked a delighted Jessica. Her mom is hesitant, but eventually concedes. “Sure. But you’ll have to wait until we get home to eat it.” 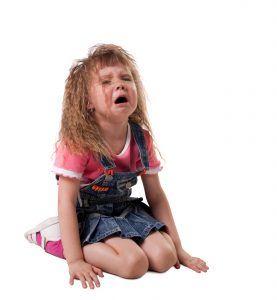 At first Jessica seems fine with this compromise. However, when they get to the car, she asks for her candy. “Jessica, I told you not until we get home,” her mother reminds her. Jessica is not thrilled. “Why can’t I have it now!” she yells. Her mother calmly replies, “Because I told you that you have to wait.”

Jessica starts to cry and refuses to get in her car seat. Through tears she screams “I want to eat it now!” As her mother tries to coax her into her car seat, Jessica continues to kick and scream.

If you’ve been to a grocery store, chances are you’ve witnessed similar meltdowns at the check-out line. Check-out lines are a nightmare for many parents. All the candy and toys call for young children to display self-control they haven’t yet mastered.

Self-control is our ability to regulate our emotions, thoughts, and behaviors in the face of temptations and impulses. It is a cognitive process that allows us to manage ourselves in order to achieve a specific goal.

For example, children who exhibit self-control can wait their turn when playing a game, can refrain from hitting others when they’re mad, and can delay gratification.

Why Is Self-Control Important?

Self-control is not a skill most preschool children have mastered. However, many Kindergarten teachers believe that it is a strong indicator of school readiness. After all, kids need self-control to be able to sit still, pay attention, follow directions, and control their impulses.

Self-control allows children to respond to stressful situations in productive ways. In the example above, if Jessica’s self-control ‘muscle’ was more developed, she might not have thrown a temper tantrum in the car.

Research findings suggest that children with low self-control abilities are more prone to aggressive behaviors. They struggle to form and maintain meaningful relationships with peers, and are often at odds with authority figures.

Several studies indicate that children who are able to exhibit self-control in preschool experience more success in school and are less likely to engage in risky behaviors as adolescents. Additionally, in a study published in Psychological Science, a journal of the Association for Psychological Science, researchers found that children with high self-control are better able to:

The findings also suggest that adults who displayed high self-control as children were more likely to find and retain employment in adulthood.

Teaching children self-control is one of the best ways that parents and care givers can prepare them for success. There are several games and activities that can help kids strengthen their self-control muscle. Let’s take a look at a few. (This list is continually growing. It’s helpful to bookmark this page to keep up to date!)

Many of the ideas listed comes from a study conducted by Tominey & McClelland (2011) in Early Education and Development (Volume 22, Issue 3).

Executive Functions: What is it and Why Is It Important