You are here: Home / Positive Parenting Tips / Getting Children to Unplug
Share this... My kids received a Disney Infinity 2.0 for Christmas and are in love with all the new characters.  They are constantly asking to play it and will sit in front of the TV all day playing games if I let them.  Even though I get to enjoy some peace and quiet while the boys are gaming, it’s not reason enough for me to allow them to binge on Disney Infinity all day long.

Inspired by Kelly from Mum-bo-Jumbo who made an airport terminal out of recycled materials, the kids and I set out to build a Disney Infinity Space Station out of cardboard boxes.

Here’s how we made our Disney Infinity Space Station.

What you will need: Cut a curved edge into a large piece of cardboard.  The size of the cardboard will depend on how big you want your space station to be. Select a box to be the base of your space station and then decorate the inside of the box .  We used construction paper, army men, and Groot from Disney Infinity to bring the cardboard box to life. Cut off two flaps from the second card board box. The other two flaps will serve as doors for your space station.  Decorate this box with construction paper, stars or other space-like embellishments. My daughter was kind enough to lend us her Barbie couch and my son drew a computer screen and map on the yellow paper.  This box will be the second level of your space headquarters. Cut a circle or as close to circular shape from a piece of cardboard.  Paste construction paper in the shape of an ‘H’ to your circle. This will be the third and final level of your space headquarters and will serve as a heliport for space crafts and other space transportation. 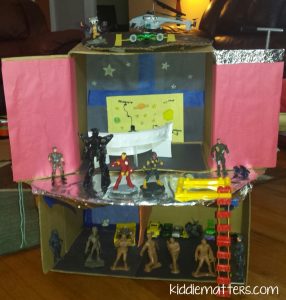 Assemble the boxes on top of each other with the curved edge cardboard between box1 and box 2.  I wrapped the curved cardboard in foil paper to give it a space-like vibe.  Attach your heliport to the top of your space station.   Secure the boxes with wood glue or any durable glue you like. Mission complete!

Now the kids don’t mind unplugging from their Disney Infinity video game.  They are so creative in the stories they come up with as they camp out in front of their space station and role play different Disney Infinity characters.  The acting is phenomenal, but I’m somewhat biased. 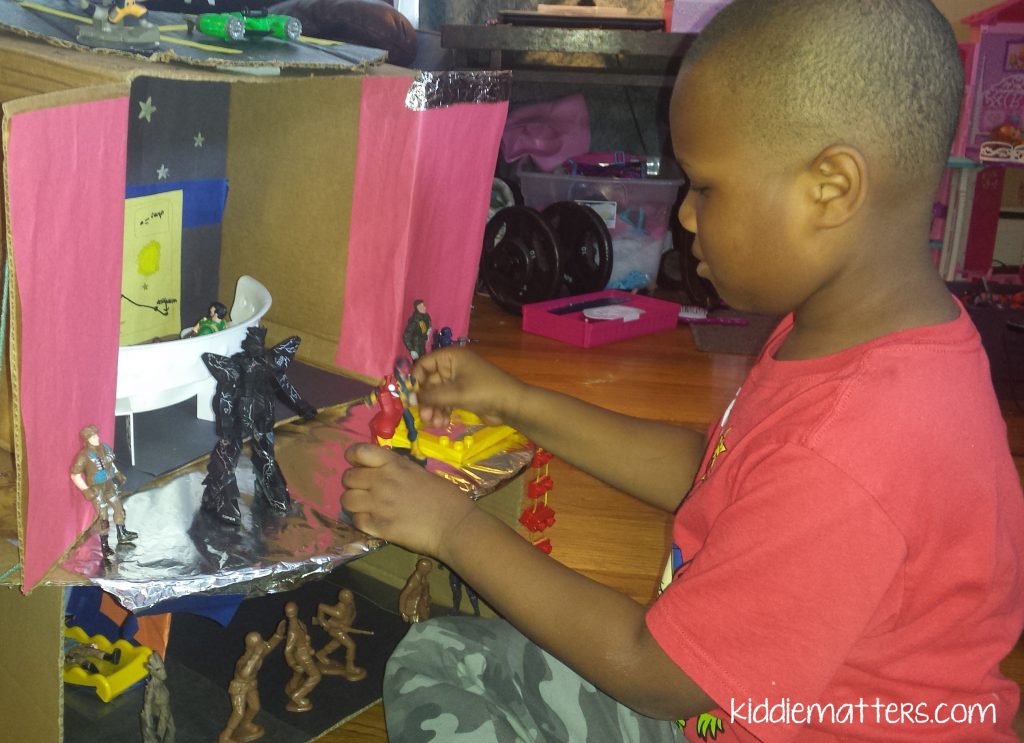 Feel free to share some creative activities your children engage in when they unplug in the comment section!