You are here: Home / Positive Parenting Tips / Does Every Kid Deserve A Trophy For Trying?
Share this... 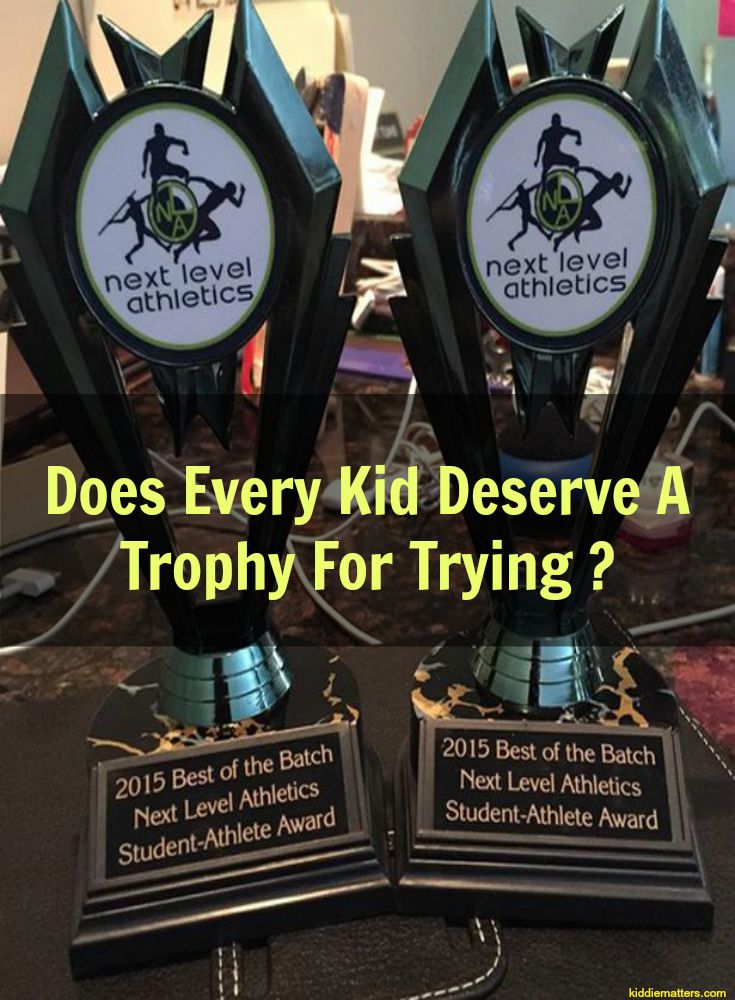 On the last day of school I had my sons clean their rooms from top to bottom and asked them to box up anything that they wanted to donate. To my surprise, my then 10 year old son packed away his participation trophy for flag football and threw out a certificate he got from participating in a science fair.  When I asked him why he threw his certificate away, he said, “it didn’t mean it anything.  They just gave it to us so we wouldn’t feel bad.”

He’s not the first child I’ve heard such words of wisdom from.  When I practiced as a school social worker, kids would earn certificates for almost making honor roll.  When their names were called during the awards assembly to receive their certificate, you could hear jeers and snickering from some of the other kids.  Some students dreaded getting these awards because they said it made them feel like “losers.”

So why are we still giving out participation trophies and certificates?

Recently, NFL football player James Harrison started a media frenzy after posting a picture of his sons’ participation trophies on Instagram with the following caption:

I came home to find out that my boys received two trophies for nothing, participation trophies! While I am very proud of my boys for everything they do and will encourage them till the day I die, these trophies will be given back until they EARN a real trophy. I’m sorry I’m not sorry for believing that everything in life should be earned and I’m not about to raise two boys to be men by making them believe that they are entitled to something just because they tried their best…cause sometimes your best is not enough, and that should drive you to want to do better…not cry and whine until somebody gives you something to shut u up and keep you happy.

Sounds like a legit argument to me! Really, what is the purpose of the ‘everybody gets a trophy’ philosophy? Don’t get me wrong, when a child tries really hard and does their best, they should be recognized.  However, it doesn’t have to be with the biggest trophy you can find!  Did you see those participation trophies Hamilton’s sons got?  Sheesh, what did the winner get?!

Since ‘trophy-gate’ unfolded, one argument stands out to me the most.  Some people argue that a participation trophy is an incentive to get children to do better next time.  So let me get this right… give the kid a trophy for trying so that next time he will work harder to get the SAME trophy? Even my four year old can’t be bamboozled by this trickery.

We are crippling our children by trying to shield them from every little discomfort.  So what your kid will get upset if they lose.  Use it as a teachable moment.  I’ve learned some valuable life lessons through falling short and failing.  I’m sure if you look back over your life, you will find that your failures made you better in some way.

I’m with Mr. Hamilton on this one.  I don’t want my children to have any delusions that they are entitled to ANYTHING they have not earned.  This is why instead of placating them with a trophy when they lose, I teach them how to lose gracefully.  Below are some ideas for how you can help your child with losing:

Express to your child that it is alright to lose

Children need to know that it is OK to lose.   Losing is a natural part of life and it happens to everyone.

Console your child while they are upset

Of course you know it’s not the end of the world that your child’s team lost a game.  However, to your child it might feel like the end of the world.  Empathize with them and let them feel their feelings.  Just don’t let the pity party carry on endlessly.  I usually give my eleven year old son an hour to just ‘be’.

Praise your child for what they did well

Even though your child may have lost a big game, there is bound to be something that they did well while they were playing. After they’ve had a decent amount of time to sit with their feelings, point out and praise them for what they did well.

Help your child plan how to do better next time

Losing gives us an opportunity to learn from our mistakes.  When your child is up to it, discuss with them areas they can improve in.  Make sure you give your child ample opportunity to identify what they think went wrong and also to figure out what they can do better next time.

Teach your child to be a good sportsman

Let your child know that a good sportsman always congratulates the winner and never throws a tantrum because they lost.  It’s important that you also let them know that when they do win, it’s best to be humble and not brag.

Model for your child the right way to lose

Children often practice what they see.  If you want your child to be able to handle losing, then show them how to go about doing that.  When you lose, let them see that even though it makes you upset, it’s not the end of the world.

In the real world, everybody does not get a trophy.  There is always a winner and a loser.  And guess what…that’s OK!