You are here: Home / Uncategorized / Responses To Microaggressions On Campus Are Hurting Students
Share this... 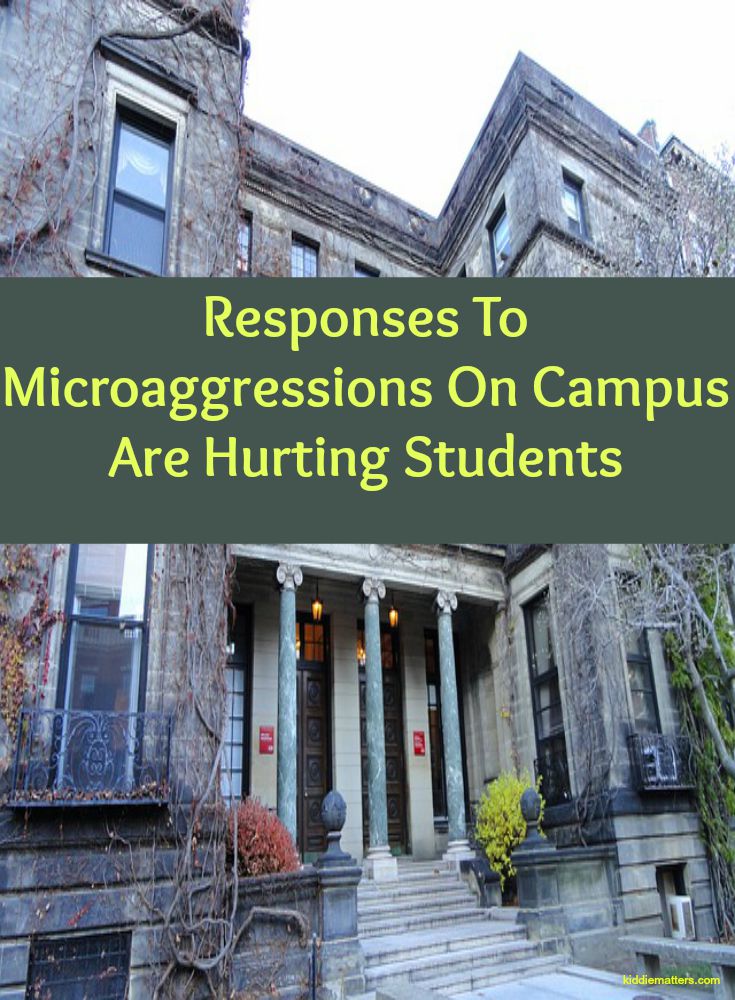 Most colleges have resumed and the Fall semester is in full swing.  If you have a student currently enrolled in college or one who will be in college soon, you will want to read Greg Lukianoff and Jonathan Haidt’s article for The Atlantic, The Coddling of the American Mind.

In the article, Lukianoff and Haidt discuss a trend that is taking over some American colleges and universities in which students are demanding that action be taken to end the use of microaggressions on college campuses.  Microaggressions are defined as “small actions or word choices that seem on their face to have no malicious intent but that are thought of as a kind of violence nonetheless.” Some believe that microaggressions allow modern day racists to get away with making racist comments or judgments against minorities.

Examples of microagressions are complimenting an African American student for being articulate or asking someone who is of Asian-descent for help with math because Asians are good at math.  For more examples of what microaggressions are, check out BuzzFeed’s 21 Racial Microagressions You Hear On A Daily Basis.

On face value, taking a stand against microaggressions sounds like a good idea.  I want the next generation to be mindful about what they say and to be concerned about how their actions impact others.  However, when college professors must walk on eggshells because they are fearful of being reprimanded for doing or saying something that a student perceives as microaggressive, things have gone too far.

According to Lukianoff and Haidt, one Harvard law student asked professors not to teach rape law or use the word violate in lectures because it could trigger a negative emotion in some students.  I imagine that any lawyer who suffers emotional pain because they hear a word that makes them uncomfortable might have an extremely difficult time practicing law.

Lukianoff and Haidt discuss several other instances of colleges reprimanding professors and students for acts they consider microagression.  For example, one university found a student guilty of racial harassment for reading the book Notre Dame and the Klan because another student was offended by the picture of a Klan rally on the book cover.

When did our children become so psychologically fragile that we have to shield them from words and ideas that may cause them emotional distress?

Wouldn’t it be wiser to empower students by teaching them coping skills to deal with situations that cause them emotional pain instead of allowing them to avoid emotional stressors at all costs?

The problem with students using avoidance as a coping strategy to manage emotional discomfort is that they learn to control their environment, not themselves.  This is inherently problematic because the only person we can control is ourselves.  The world won’t bend and make adjustments because your feelings get hurt.  Therefore, you have to be able to cope with any unpleasantness you encounter in the real world.

Don’t get me wrong, if someone is clearly making offensive statements like you only got into college because of affirmative action, they should be held accountable.  However, at some point we have to draw the line at what is considered offensive and what is just an overreaction to an ignorant comment.

For example, the University of California, Los Angeles (UCLA) guide on microaggressions considers statements like when I see you I don’t see color, or I believe in only one race, the human race as forms of microaggression.  UCLA claims that making such statements sends the message that:

UCLA doesn’t stop there.  They also consider phrases like gender plays no part in who we hire and America is the land of opportunity as being microaggressive because they claim such statements implies that there are equal opportunities for men, women, Whites, and minorities.  Therefore, if women and people of color aren’t finding success, the problem is with them.

Sure an argument can be made that the aforementioned statements are borderline clueless and ignorant.  However, instead of penalizing people for their ignorance, we would be better served by teaching them how to be more culturally sensitive.

If you think there aren’t any unintended consequences of colleges and universities going above and beyond to protect students from perceived microaggressive banter or behavior, think again.

This desire to shield college students from words and ideas infantilizes students and turns them into helpless victims.  How does this prepare them for the real world?

Additionally, how can students be taught to think critically if they can’t even bring themselves to question their beliefs or tolerate words and ideas that make them uncomfortable?

Treating our kids like they are somehow entitled to only have positive experiences does not prepare them for the real world. Let’s face it, life is filled with many challenges and disappointments.  You don’t always have the option to run away from the discomfort.  Sometimes you have to stay and sort through the mess.  That’s how you grow and become a better person.