You are here: Home / Uncategorized / Why Are We Demonizing Ahmed Mohamed’s Teacher?
Share this... My eleven year old son is at that stage where everything has to be fair and when it is not he loses his cool and makes poor choices.  As a way to keep his anger in check, he and I made a calm down bottle that he could fidget with in school when he got frustrated. 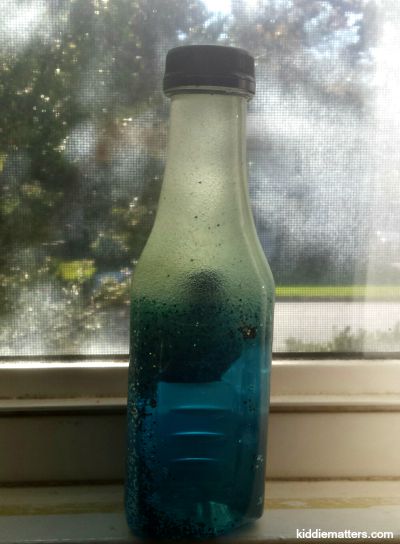 When my son’s teacher saw the jar she didn’t grasp her pearls and wonder what kind of suspicious liquid he had in this bottle of his.  She didn’t confiscate it and call the police because she was fearful he had brought some kind of toxic chemical that he was about to unleash on his classmates.

You know what she did? She talked to him about the calm down bottle he made and had him explain to her how it worked.  She used it as a teachable moment to talk to her students about things they can do to calm down when they are upset.

I wish this was the response that 14 year old Ahmed Mohamed received when he showed his teacher his homemade clock.

Image of Ahmed’s clock provided by the Irving Police Department

Unfortunately, she thought it was a bomb and alerted school officials who then notified law enforcement.  This led to poor Ahmed being marched out in front of his peers in hand cuffs. Was the reaction overkill…YEAH!! I could see confiscating the device from the young man and having his parents come pick it up.  I mean when Ahmed’s engineering teacher (not the teacher who reported him) saw the clock, he praised him for his creation, but told him to put it away and to leave it at home.  This seems like a reasonable response to me. Of course an even better response might have been for this teacher to take the device from Ahmed and return it to him after school.  Then we probably wouldn’t be talking about this young man at all!

Many assume that the teacher’s decision to report Ahmed was consciously or subconsciously motivated by the fact that his last name is Mohamed and that he is Muslim. I don’t know if this is indeed the case.  I’m not going to jump to the conclusion that this woman is somehow racist because of one decision that she made.

I would hope that if my child’s teacher saw a suspicious beeping device in her classroom she would intervene and say something.

We can’t hold the teacher accountable for what school officials chose to do with the information she shared with them. The outrage against the teacher might make for good headlines, but let’s face it, if Ahmed’s device had turned out to be a bomb, we would be hailing this teacher as an American hero for acting swiftly and saving lives.

But it wasn’t a bomb, so now she is being characterized as your garden variety racist.  Yes, she was wrong to assume that Ahmed’s device could not be a clock and must be a bomb.  However, demonizing her only makes for shocking news headlines.  It does nothing to address the broader issue of racial profiling and anti-Muslim sentiments.

This is why my gripe is not so much with the teacher, but with the school officials and the media.  The school handled the situation poorly and were way too overzealous in their response.  Did they even entertain the thought that maybe Ahmed was telling the truth?  I mean did law enforcement really need to be involved? The boy made no threats and he repeatedly told the adults it was a clock.  Even if law enforcement intervention was necessary, did they have to hand cuff Ahmed to escort him out the building? In my opinion, absolutely not.

The media coverage hasn’t helped much either and seems focused on fueling people’s anger and outrage toward the school and the teacher.  Now you have two groups of right fighters battling it out about who is right and who is wrong.  The school feels the teacher did the right thing by following protocol and Ahmed supporters believe she reported Ahmed because she is racist.

How exactly does this debate help Ahmed and other Muslim students?  It doesn’t.  Another story will pop up and Ahmed Mohamed’s fifteen minutes of fame will be over.  Unfortunately for Mohamed and other Muslims, this will not be the last time someone looks at them with suspicion.  Where will all the right fighters be then?

It’s not enough to just highlight an issue, make a big stink on social media for a day or two, and then fade away into obscurity.  Screaming at this teacher and school officials that they are racist does not help them to evaluate their overreaction to the incident.  It only puts them on the defensive and makes them even more committed to believing that their response was justified.

I hope once the noise and rhetoric quells, as a nation, we will be able to have a more meaningful dialogue that leads to real solutions.  For although Ahmed is now receiving invitations from the President of the United States, NASA, and MIT, there are countless other Ahmed’s out there who will be judged because of their ethnicity and believe me, this will not lead to them getting an invitation to the White House.