You are here: Home / Social Emotional Learning / Celebrating Father’s Day When Your Child’s Dad Is Gone
Share this...

Every Father’s Day my kids jump in bed with their dad, shoving whatever gifts they made him into his face.  Each of them wanting him to open their gift first. My husband gushes over each present and showers the kids with praise and hugs. This is a stark difference from how I celebrated Father’s Day as a kid. My dad was M.I.A and Father’s Day triggered strong feelings of abandonment. I spent Father’s Day in my room wondering what it would be like to celebrate my dad with gifts and a homemade card. 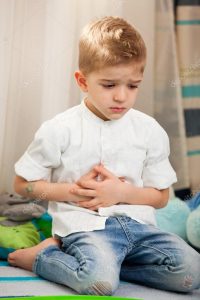 According to the National Fatherhood Initiative, an estimated 24 million children will spend Father’s Day in a father-absent home. Some children will go about their day just fine, while others might struggle to deal with the myriad of emotions that Father’s Day triggers for them. Knowing how to navigate this sensitive subject can be difficult. Below are five suggestions for how to help a child who is having a hard time celebrating Father’s Day.

1. Talk to your child about what Father’s Day means to them. Some parents believe that if they bring up the child’s father it will upset them.  The reality is, children will think about their dad on Father’s Day. It would be hard for them not to. Don’t be afraid to talk to your child about how Father’s Day makes them feel.  The last thing you want is for your child to hold negative feelings inside. Ask them how it makes them feel that their dad is absent.  Depending on the age of the child, you might have to suggest feeling words. For example, try asking them if they feel sad, angry, confused, or any other emotion you think the child is experiencing. Let them know that there is no wrong emotion to feel and whatever emotion they are feeling is OK.

2. Answer any questions your child has about their father truthfully. If your child doesn’t already know why their dad isn’t around, they might have questions.  Try and answer their questions as truthfully as possible.  When kids are in the dark about what is going on, they have a tendency to blame themselves.  If they have no clue as to why their father is absent, they might believe his absence is their fault. However, share only the details that are appropriate for their age. Make sure the child understands that it is not their fault that their father isn’t around. Also, it’s important that no matter your feelings toward the absent parent, that you refrain from speaking about them negatively.

3. Ask the magic wand question. This is a common therapeutic technique used to get children to open up when faced with complicated issues. Kids don’t always have the language to express their thoughts and feelings.  Asking them the magic wand question gives them an opportunity to explore how they are feeling about a given situation.  Here’s an example of how you can phrase the magic wand question: If you had a magic wand and could create the relationship you want with your father, what would it be like? You can either have your child say, write, or draw their answer. Their answers typically provide a great deal of insight into what they feel is missing in their lives due to their father’s absence.

4. Plan a Father’s Day activity with a positive male role model in your child’s life.  Father’s Day doesn’t have to be about celebrating a biological father. Maybe there’s a favorite uncle or grandpa that stepped in for the absentee dad. There’s nothing wrong with celebrating them for stepping up and being their for your child. Having a father figure to stand-in for the absent father is also a great way to handle Father’s Day celebrations that happen at school. This saves your child from feeling left out when other kids bring their dads or dad surrogates to these events.  If your child would rather not participate in these activities, don’t force them.  Respect their wishes and just be there for them.

5. Let your child know you love them unconditionally. Children experience so many emotions when their fathers choose to be absent from their lives. It’s important for them to understand that even though their dad chose not to stick around, they are still lovable. Being abandoned by their father makes some kids feel unlovable, especially if they believe their father’s absence is their fault. Knowing that the parent who is still in their lives loves them unconditionally helps children believe and accept that they are worthy and indeed lovable.  Having their dad not show up for them will still hurt.  However, at least they can count on you to be a constant in their lives.

An Open Letter To Fatherless Daughters On Father’s Day 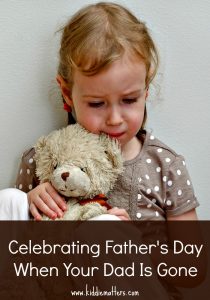