You are here: Home / Uncategorized / She’s My Child…I’ll Pierce Her Ears If I Want To
Share this... 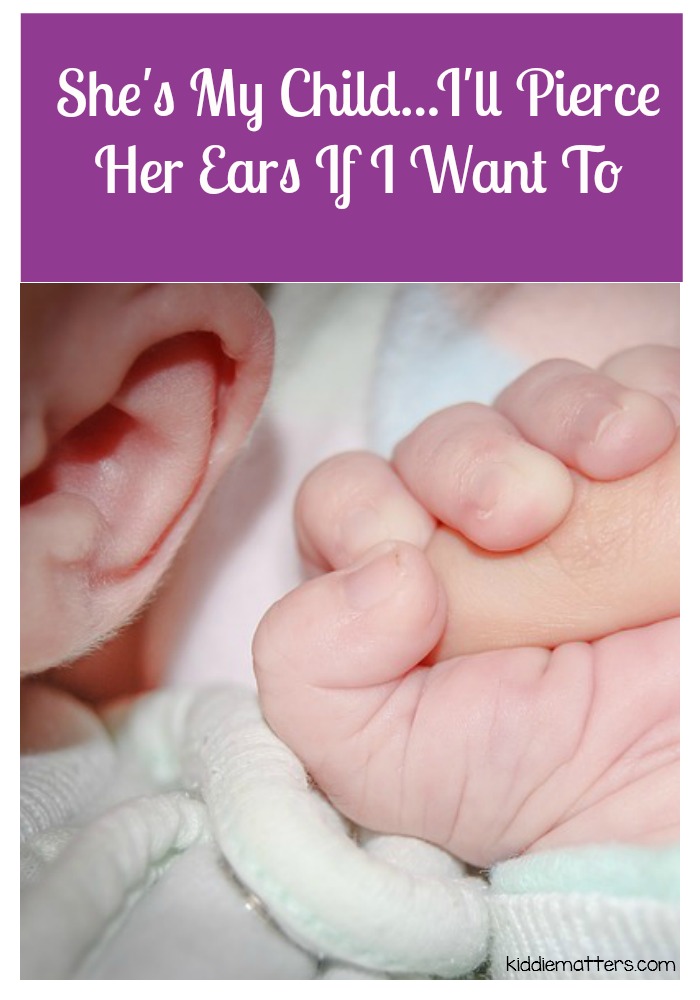 I was scrolling through my Facebook news feed today to catch up on news that doesn’t terrify me. All was going well until I came across a rather intriguing post, and by intriguing I mean it evoked a WTF response from me. The post was about a petition in the UK that is asking for a ban on ear piercings for infants and toddlers. The argument is that piercing a young child’s ear is a form of cruelty. I found the whole thing absurd, but out of curiosity I read the comments. After reading the first few, I realized that I was witnessing the formation of an all new mommy war.

In one corner are the moms who say how dare you mutilate your child and cause them unnecessary pain in the name of fashion? Kids are beautiful just as they are and giving them earrings is vile and disgusting. They are calling for an immediate end to all infant piercings. (I wonder what they think about circumcisions?)

In the other corner are the moms that hold a more liberal view. They say hey, live and let live. If the parents think it’s OK then what’s the big deal? The child isn’t in any harm and if the child doesn’t want the piercing when they get older, all they have to do is take out the earrings.

My stand on the whole thing, WTF?! Of all the cruel things to take a stand against, and they choose ear piercings? Talk about a first world problem! I guess it’s much more acceptable to talk about the cruelties of ear piercing than it is to talk about the real atrocities against children. You know, like child abuse and children being sold into sex slavery.

I want to know how this petition even came into existence. I mean is there a group of people out there that have had their lives negatively impacted because their ears were pierced as infants? Or is this petition masterminded by a disgruntled employee who got stuck doing all the baby piercings? I’m really at a loss for how this became a ‘thing.’

I pierced my daughter’s ear when she was a year old. The whole affair lasted about an hour. I spent thirty minutes looking for the perfect earrings, fifteen minutes lining up where the piercings would go, five minutes changing my mind, and five minutes for the lady to actually pierce my daughter’s ears. Yes, she cried when it happened. Then she got a Popsicle and was fine. There was nothing cruel about the experience. It’s not like I pierced her ears myself in the kitchen with a hot sewing needle.

Sure I could’ve waited until she made the decision herself, but I didn’t. I am likely to make a whole lot of decisions on my daughter’s behalf that she will resent me for later. Like the hand me down pumpkin costume I made her wear for Halloween or deciding to have her christened. Somehow I doubt that piercing her ears will make the list of resentments. Even if it does, that’s an issue between me and her. No one else needs to intervene and tell me how terrible I am for piercing her ears.

It’s hard enough doing this mom thing and most moms are already beating themselves up for not being perfect. Do we really need judgment passed on us based on our decision to pierce our child’s ears? If people find piercing the ears of an infant or toddler repulsive, then guess what, they don’t have to pierce their kid’s ears! We won’t judge you, I promise.